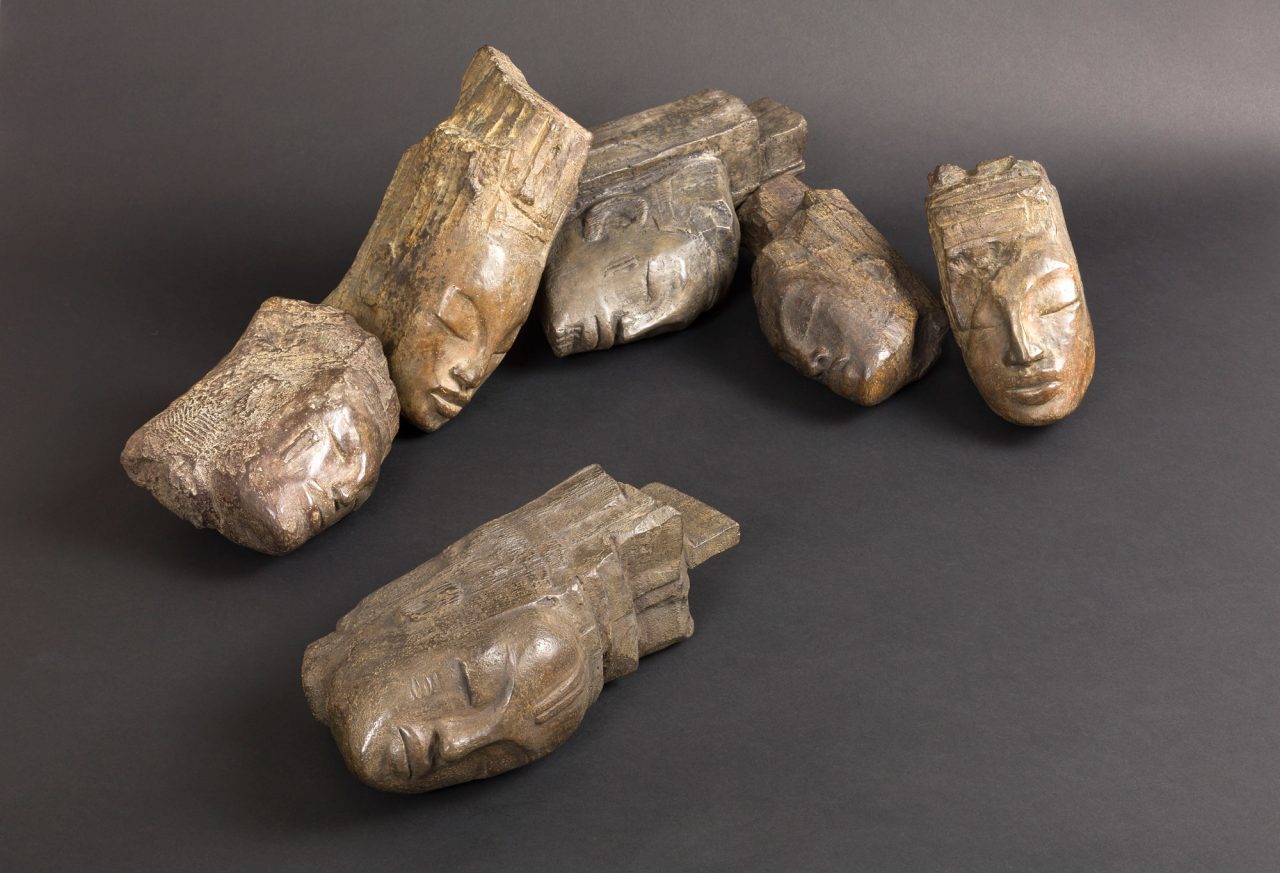 Deborah Bell, one of South Africa’s most eminent and critically acclaimed artists, returns to London with an exhibition at Everard Read. Sentinels is a major exhibition of monumental sculptures and more than 30 new paintings created over the past two years. At the heart of the exhibition are eight towering, 2.5-metre-high sculptures, Sentinels (2020). Cast in bronze, their origins trace back to the series of nine sentinels the artist made in 2003. 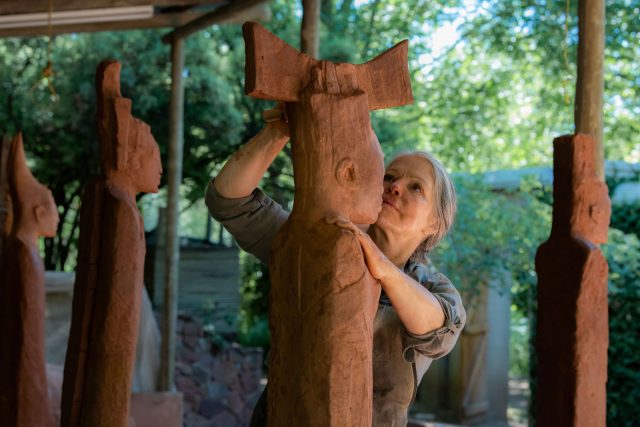 Those sentinels drew some of their inspiration from the columnar figures and statuary which Bell was looking at during this period; they became like guardians, observers occupying a place of stillness and reflection. Created using techniques evolved by Bell, these commanding figures became part of a journey of discovery for the artist. She explains; “In 2003 at a time when I found myself between two places, with no home, no kiln nor studio to work in, I made my first set of nine Sentinels. Their form evolved from working with pillars of hard extruded clay that came out of the pugmill at a brick factory. Working with this clay on these columnar shapes suggested a new way of working. I began to carve, and carve again, a way of both revealing and creating which was different to the slow circular building up through coiling that I had used in my earlier clay work. The material taught my hands what to do, and I was reminded of Gothic imagery of saints, prophets and kings, ancient hermae placed at crossings and boundaries to ward off evil, and African veranda posts and wooden staffs that similarly recognised another realm that could offer protection.

“In the process of working, my columnar figures became guardians or sentinels. I thought that if, on a subatomic level, everything exists as a sea of energy and potential, then who are the observers who hold this material world in focus?”

See also: Canova and Thorvaldsen: The Birth of Modern Sculpture 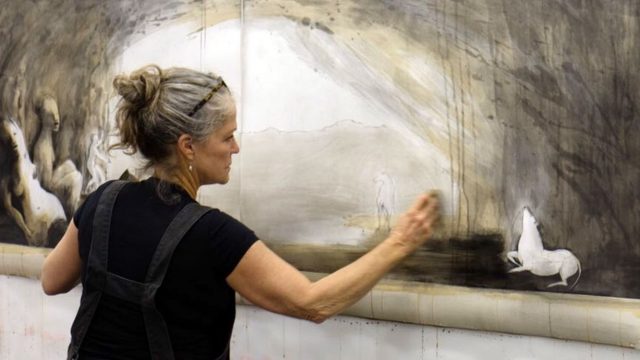 Deborah Bell (b. 1957, South Africa) is one of South Africa’s most celebrated contemporary artists. She works in a range of media on canvas and paper, produces dry point etchings and large-scale bronzes. Her earlier more political work has given way to a broader, deeper investigation into the border been mortality and immortality, matter and spirit, presence and absence, the quotidian and the mythic, the grounded and transcendent. In recent years she has developed an immediately recognisable visual language, her images simple, stark, symbolic – grounded, silent, still, poised. As Ricky Burnett has stated: at the very edge of time.

In 2019 Everard Read London approached Bell about revisiting her 2003 Sentinels. All editions of the original sculptures had been sold but it prompted Bell to explore these guardian figures again. “When I made the original nine Sentinels,” says Bell, “I was aware of the mystical number of nine as the trinity of trinities, and as a symbol of transformation and completion. In researching the symbol of the number eight I understood it as the number of regeneration and harmony and balance, as well as being a Christian symbol of salvation and resurrection. I also learnt about the Chinese Eight Immortals who control all aspects of life and have eight tools of power that can give life or destroy evil. It seemed fitting to make a new series of Sentinels of that number.”

Bell views the new Sentinels (2020) as quite different from the first and original set: “They grow out of the clay as if they are growing out of rock. They are elemental – part of the earth. For the last few years, I have explored the materiality of flesh and its connection to our earth. I’m aware that so many cultures in their religions and myths talk about the creation of man from clay. I work in clay to create or reveal a human figure, but I also sense that clay knows how to become rock, and that clay itself is formed from the weathering of rock. This cycling of rebirth interests me – it touches some deep knowing that I am unable to explain.” 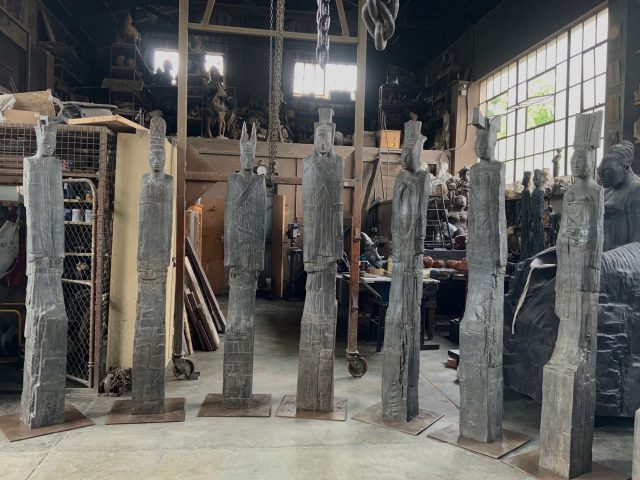 Bell subscribes to the notion of art as magical object and she makes artworks with the intention to transform. She likens her work to “a form of alchemy, an ancient process of transmutation of base metals into gold, in search of the meaning of life.” Indeed, she feels that each new image she creates is a transformation, a melting in the crucible which results in a personal transformation. In this, there is something shamanistic about her practice.

The Sentinels (2020) have been cast in bronze, and Bell acknowledges that whilst the firing of clay changes the property of the material, so does the elemental casting into bronze. “For me, both symbolise the alchemical fire,” she says. Bell’s creation of the Sentinels (2020) marks the end of a chapter for the artist: “As I was working on these new Sentinels, a friend brought to my attention that I had made that first set of nine when I was between two places – about to move homes, and now that I am about to relocate again after seventeen years, I am making them once more. In a way both sets are like bookends to a segment of my life.”

For much of Bell’s working life as an artist, which has included collaborations with friend and fellow South African artist, William Kentridge, she has been on a quest to connect with herself, with others, and with the mysterious forces that are inside and around her. Increasingly, her art-making has been part of a very personal, spiritual journey. She makes art to explore, to enter into the unknown, to surrender control and to alter herself.

Bell is fascinated by ancient civilisations and their excavated artefacts. Her work incorporates powerful images and layered visual, symbolic and iconographic references of past and present worlds. In her iconography, the artist draws from a range of cultures – African, Chinese, Egyptian, Greek, early Christian, European – and a range of psychologies and philosophies, particularly the Buddhist preoccupation with stillness and the shedding of attachment and the ego.

Bell’s art conveys themes that have evolved through dreams, meditations, altered states, spiritual quests and the process of working. They record her journey into the mysteries of the cosmos – and, like metaphors, like symbols, her works stand for the beings, the presences, the nodes of meaning and association that she has encountered along the way. In Bell’s work human figures have embodied the seeker on a journey, often accompanied by lions, hounds, wolves, horses and totemic modes of transport such as boats and chariots. 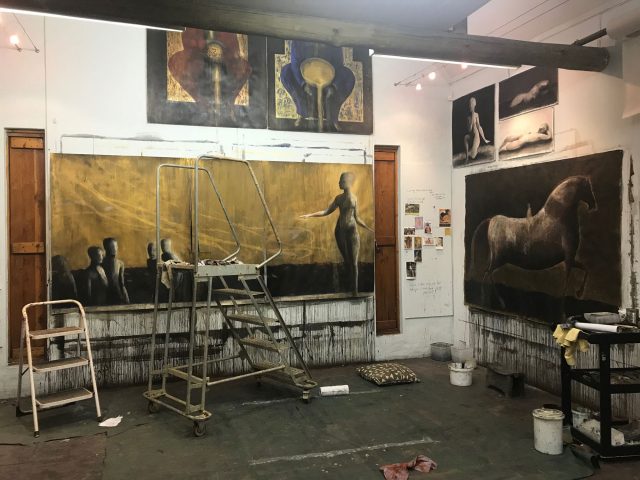 Recently, and evident in this new body of work, the spirit animals that have transported her, and the horses in particular, have grown in scale and become more like resting places in themselves, symbols for the world or for home. Their riders have, in turn, become less protagonists, less figures with agency, and more like figures present at a greater event, experiencing something greater than themselves and being content to dwell there. Bell has arrived at a place beyond judgement, a place of realisation that each of us is a spark from the divine fire, an individual expression of a far greater mystery. Everard Read has represented Deborah Bell for a decade. This is her seventh solo exhibition with Everard Read galleries.

Deborah Bell’s work is represented in public and private collections around the world including the Museum of Modern Art, New York, the Smithsonian Institute and the National Gallery of Art, Washington, DC, the Hara Museum, Tokyo and the IZIKO South African National Gallery, Cape Town.