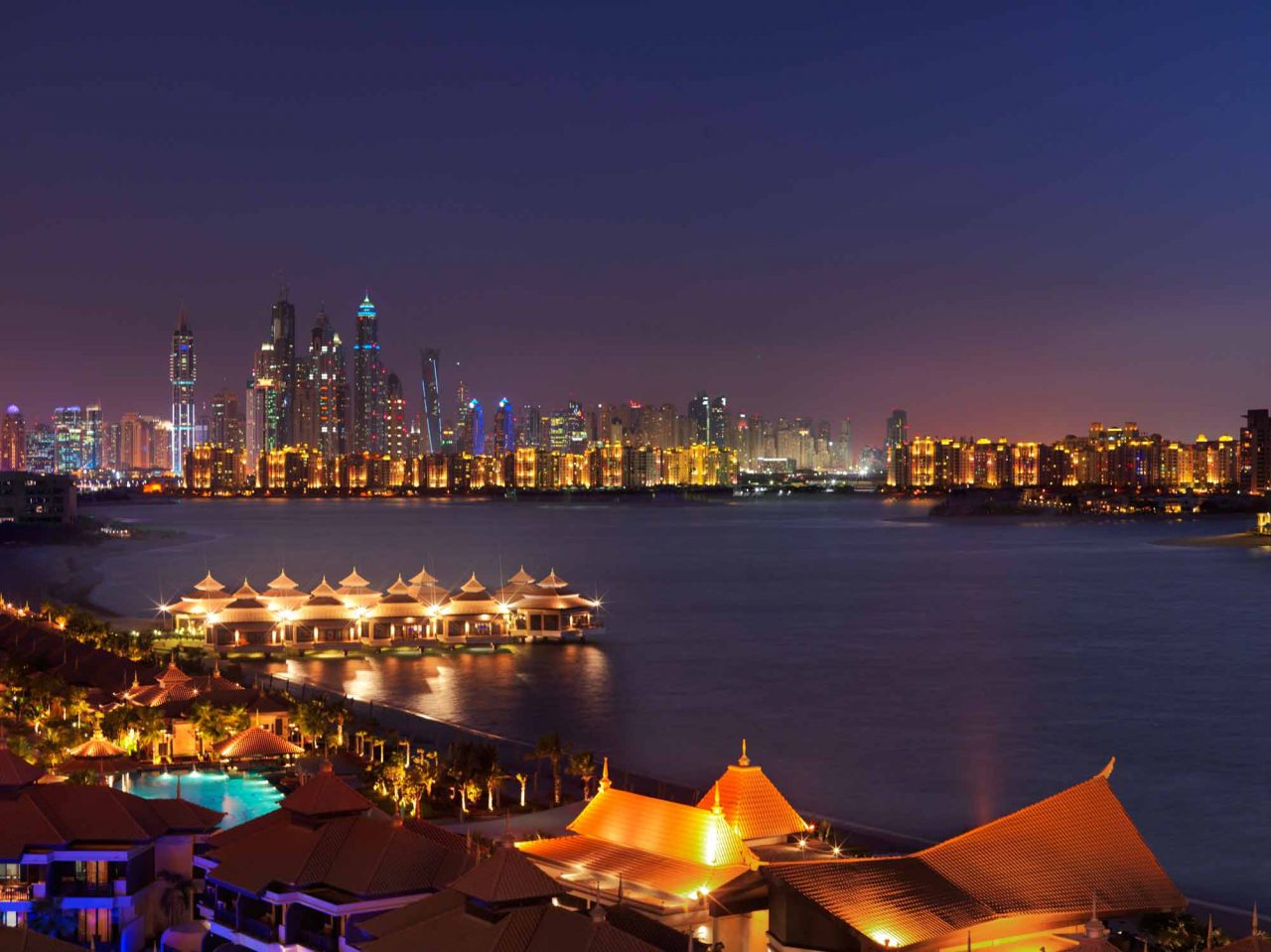 It may seem like a small city nestled neatly on the Persian Gulf coast, but since stumbling on a rich oil reserve in 1966, Dubai’s presence on the world stage has been anything but. Home to the tallest building in the world (the Burj Khalifa, at 828 metres); the world’s only seven-star hyper-luxury hotel (the Burj Al Arab); and internationally recognised for its gleaming skyline, this young Emirati state’s ostentatious display of wealth and ‘bigger-and-better-than-you’ attitude draws in millions of tourists from all corners of the globe every year.

Our hotel, the impressive five-star Anantara Hotel Resort & Spa, is perched on the outermost edge of Palm Jumeirah’s colossal crescent. Yet another nod towards Dubai’s superlative architectural and engineering feats, this man-made, palm tree-shaped island protrudes out into the Arabian Sea and houses some of the U.A.E.’s most iconic luxury hotels and residences. Inside, the interior gleams with Thai influence: dark wood furnishings, gold embroidered textiles and elaborate, calming water features merge seamlessly with traditional geometric Arabic architecture. The Anantara boasts some 293 rooms, pool villas and apartments, and is surrounded by a lazy stretch of private beach that looks out into the Arabian Sea, with the Atlantis Hotel, shimmering like a mirage, in the distance.

The French doors in our spacious, cool room lead out into a private balcony, where the Burj Al Arab—famous for its boat sail shape—sits smack bang in the centre of our view. At just 20 minutes from Dubai’s centre by car, it’s the perfect base for a long weekend.

Venture out beyond the futuristic, bustle of the city, and you will hit the rusty landscape of the Arabian Desert. On day two of our trip, we hop in a jeep for a desert safari; an ever-popular excursion that promises to ‘thrill’ and offer well-paying customers a truly traditional Middle Eastern experience. Our host—quiet, unbothered by our excitement—drives with gusto over the deep swells of the desert’s red dunes and down, sideways into sand craters at breakneck speed. (NB. If you are a sick-prone passenger, pregnant, or suffering with back problems, then this is not for you. Instead, meet the rest of your clan later on at the destination camp in the desert for less injurious activities.)

The desert, which comprises most of the Arabian Peninsula, is not as uninhabitable as you might think. It’s home to some seriously wondrous desert-adapted animals including gazelles, sand cats and the Oryx, and while greenery is rare, some endemic foliage grows strong here. For the more astronomically-inclined, some tours offer a night beneath the stars, where, uninterrupted by light pollution from surrounding cities, the inky black skies illuminate with a clear view of the milky way. For luxury desert camping, the eco-friendly Al Maha Resort and Spa in Murquab invites guests to escape in the Dubai Desert Conservation Reserve from £520 per night.

After sundown, we reach a large campsite. Outside, camels graze and rest on the cooling sand. Inside, low tables on Persian rugs surround a central stage where a belly dancer and fire breather perform while we feast on spread of Arabic mezze, curries and grilled meats. The atmosphere this evening has a sense of community at its heart, and we leave hours later with our bellies full of food and laughter. For something as—completely—novelty as this, it’s an excursion that’s good for the soul. Depending on what you fancy, prices for these tours vary in terms of luxury, privacy and activities.

Interestingly, just 10 percent of local Emiratis make up Dubai’s population. The rest comprises expatriates from Europe and neighbouring countries including Pakistan and India (“Do you think I’d be driving a cab if I was an Emirati?” Our Pakistani taxi man laughs, alluding to the cash-rich locals). This melting pot of nationalities makes cuisine in the area vast, but if you’re looking to indulge in the Middle East’s culinary heritage, then some standout fine dining restaurants in the region serve excellent offerings.

Five-star Lebanese restaurant Al Nafoorah, situated in the Jumeirah Emirates Towers, offers one of the best examples of local Arabic cuisine for a pretty penny—a standard meal could set you back up to AED 1,000 (around £210) per person. The menu is filled with hot and cold mezze dishes including fried kibbeh and moajanat moshakala, and abundant seafood and grilled meat options including suman fillet and kebab halabi.

When to visit Dubai

Because of the heat, Dubai tends to hibernate during the summer months. From June to October, temperatures can reach stifling numbers—our stay in early September saw upwards of 42C every day—but this does mean fewer crowds for those who prefer a low-key holiday. Peak season in Dubai is between February to April when temperatures drop to a warm, but comfortable 25C.