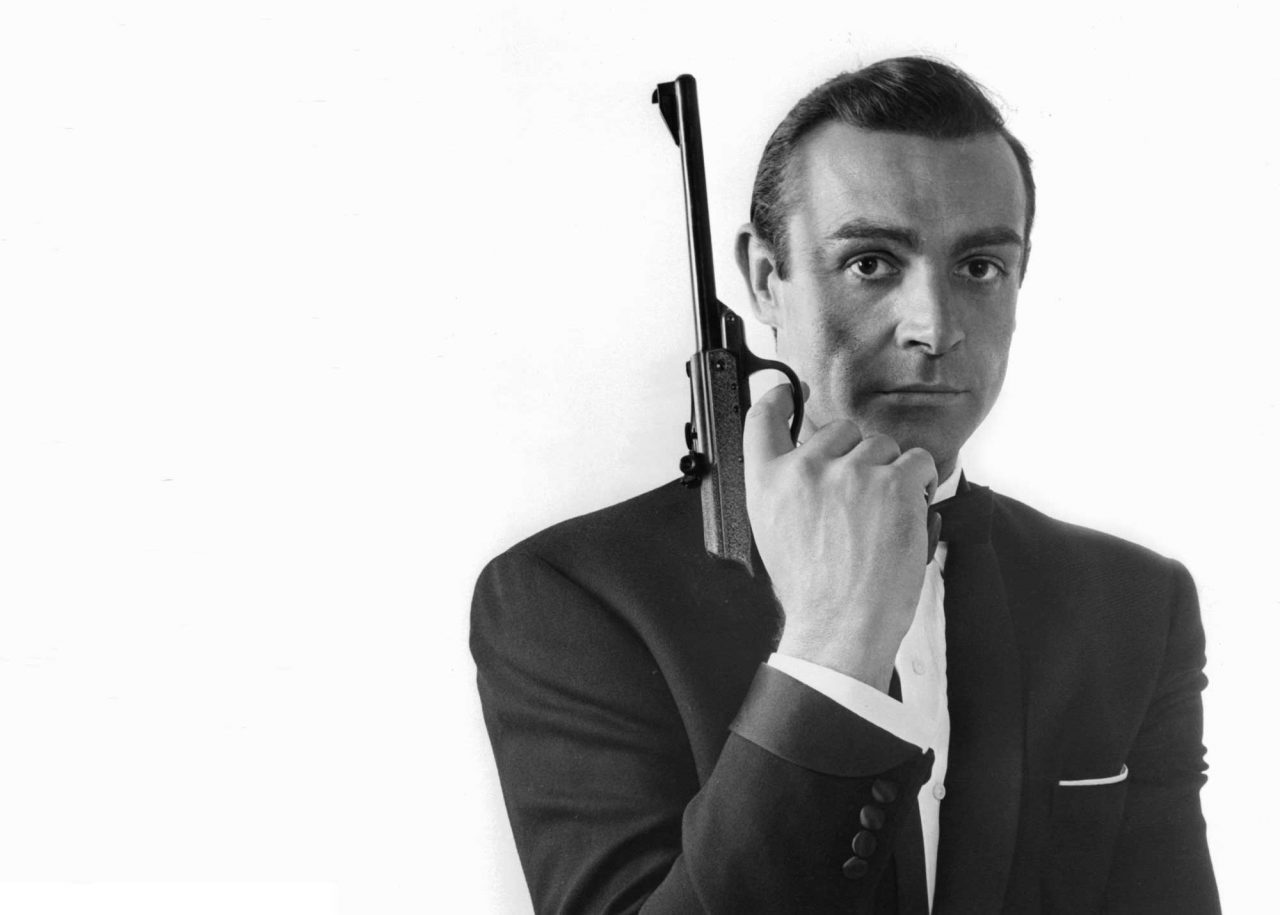 With the sad death of Sir Sean Connery, and the 100th birthday of the character James Bond coming up, the secret agent has never been more in the spotlight, or under the hammer. So is now a good time to buy James Bond Memorabilia at auction?

Sir Sean Connery’s sad death in October 2020 reminded us all that the character of James Bond remains as entertaining, controversial, and stylish as ever. With the 100th anniversary of Ian Fleming’s superspy in sight, moviegoers and auctioneers alike seem to have an endless enthusiasm for all things 007 and in particular James Bond memorabilia.

While we wait – and wait, and wait – for the 21st James Bond movie No Time to Die to finally make it into COVID-blasted cinema chains, we’re reminded that long before Daniel Craig’s fun-free interpretation of the character, there were colourful, sexy, entertaining James Bonds that embraced contemporary trends, fashions and lifestyles.

In everything from gentlemen’s couture to accessories and cars, James Bond has always been the man other men want to be, and women want to be with.

Sotheby’s celebrated Bondmania in November 2020 with a series of James Bond Memorabilia auctions; A Collection of Books and Manuscripts, The Property of a Gentleman; James Bond Film Posters; and Watches Weekly – James Bond – not to mention the sale of an Aston Martin DB5, the car still most associated with 007. 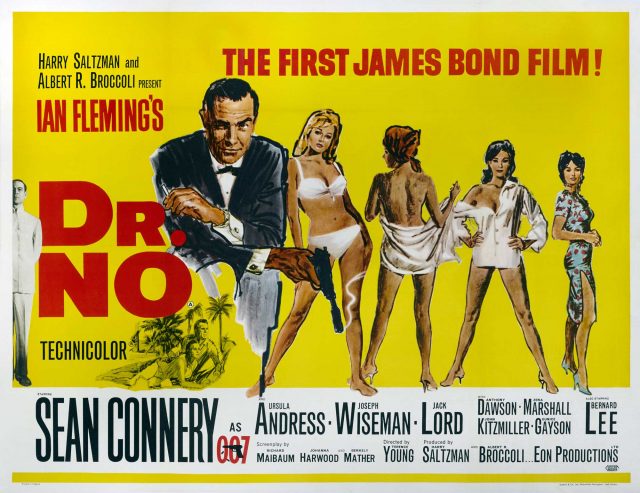 The association between Sotheby’s and James Bond of course goes back a long way. In Ian Fleming’s specially-commissioned 1963 short story, The Property of a Lady, Bond visits Sotheby’s in New Bond Street with a view to flushing out a top Soviet agent during the auction of a Fabergé masterpiece.

Writer Ian Fleming and his wife Ann were friends of Lady Aline Berlin, whose son Michel Strauss set up Sotheby’s Impressionist and Modern Art department in London. Through this connection, Michel Strauss asked Ian Fleming if he would contribute a story to the 1963 edition of Sotheby’s yearbook, The Ivory Hammer. He didn’t take much persuading; during the Second World War, Fleming had served beside Sotheby’s chairman Peter Wilson in British Intelligence, and indeed Wilson features as a character in Property of a Lady.

Ian Fleming and his wife certainly felt at home in the art world – among their friends were Francis Bacon, Cecil Beaton and Lucian Freud, who painted Ann’s portrait. Nowadays, James Bond memorabilia regularly appear in auctions, attracting both movie buffs, and those to whom James Bond’s sense of style and élan are perhaps a reminder of forgotten days.

In Sotheby’s James Bond Memorabilia auction James Bond: A Collection of Books and Manuscripts, The Property of a Gentleman, the gentleman in question was Ian Fleming: the books presented were remarkable not just for their rarity, but for their biographical narrative of Fleming’s life. They included his 1918 copy of Boy’s Own Journal, his 1948 manual of journalism for Kemsley Newspapers, and James Bond novels inscribed to friends and colleagues including Bobby Kennedy and Winston Churchill.

The James Bond Film Posters event was equally colourful, arguably moreso as it featured much work by the largely unheralded poster artist Robert MGinnis. The American’s spectacular montage artwork for movies is typical of blockbusters of the 60s and 70s, and rapidly becoming sought-after. The original Robert McGinnis artwork for the poster of You Only Live Twice (1967) sold for a hammer price of $65,000 at Bonhams in Los Angeles in 2019.

Sotheby’s James Bond Memorabilia auction featured almost 200 original film posters, photographs and promotional material dedicated to Britain’s most renowned fictional secret service agent, spanning 60 years and covering all twenty-five films in this highest-grossing film series of all time. Highlights included British, American French and Russian posters for the early Sean Connery films including Dr No, Thunderball and From Russia With Love, with estimates from around £4,000 to £25,000; brand tie-in posters for Voit, Aston Martin, Glastron Boats and Guinness; transparencies, lobby cards, magazines and even Roger Moore’s director’s chair, signed by the great man himself, as well as a roster of James Bond girls.

The connection between James Bond and desirable watches of course dates back all the way to Ian Fleming’s first James Bond novel, Casino Royale, in which he wears a Rolex, the model of which has been the subject of debate. Fleming himself wore a Rolex Reference 1016, one of which appeared in Sotheby’s Watches Weekly | James Bond auction in November along with Explorer and Zenith models.

Throughout the movie series, Bond has also been seen wearing Omega watches, and the auction included a Speedmaster Alaska Project stainless steel chronograph wristwatch circa 2008 with an estimate of £8,000.

Highlight of Sotheby’s James Bond season, though, was inevitably the 1964 Aston Martin DB5 offered for private sale by RM Sotheby’s. Chassis 1591 rolled off the production line at Newport Pagnell and was delivered to Brooklands on the 21st May 1964, finished in Sierra Blue over Grey Connolly leather, unlike James Bond’s Silver Birch model. This DB5, though, had all the luxuries – the new 4.0 litre engine, triple SU carburettors, a ZF five-speed gearbox and all-round Girling disc brakes, producing 282bhp and a top speed of 148 mph. Air conditioning and electric windows contributed to comfort.

In single ownership for 42 years between 1971–2013, the DB5 has undergone an extensive two-year nut and bolt restoration with Tudor and Black, benefitting from factory approved upgraded suspension, fully renewed brakes, electric power steering, and a bare shell respray in handsome California Sage.

Sotheby’s wasn’t the only auction house to succumb to James Bond Memorabilia fever in November 2020, with Ewbank’s auctions of James Bond memorabilia, aptly titled A Time To Buy, offering a British Quad poster for Dr No estimated at £6-9,000 which sold for £22,000, and other James Bond posters and memorabilia reaching ten times their estimate.

Ewbank’s James Bond specialist Alastair McCrea is in regular contact with a network of influential collectors seeking rare film posters, props and costumes associated with the long-lasting series of films that now stretch back almost 60 years. His hints for collectors including looking for Sean Connery era memorabilia, which is always the most prized, and sticking to authentic pieces rather than replicas.

Juliens’s Auctions of Los Angeles heated up the action a little with its Icons & Idols auction, offering the Walther PP handgun used by Sean Connery as James Bond in 1962’s Dr. No. The deactivated handgun was one of two props employed in the film, identified by the original film armorer, BAPTY in the UK, who had it until 2006. Its estimate was $150,000 to $200,000.

But the ultimate James Bond collectable, offered by estate agents Knight Frank, was Sean Connery’s luxurious villa outside Nice, where he lived in the 1980s and 90s. The 1920’s seafront mansion boasts magnificent sea views, 24-acre grounds and two guest houses. Featuring in the semi-official 1983 Bond movie Never Say Never Again, the villa was on sale for £25m – the sort of money that might make even Goldfinger think twice. 

If you enjoyed our James Bond Memorabilia at Auction article then do make sure that you also read: No Time to Die for James Bond

Negotiating the Terrain of the Future: Behind the Scenes at Artes Mundi with Nigel Prince