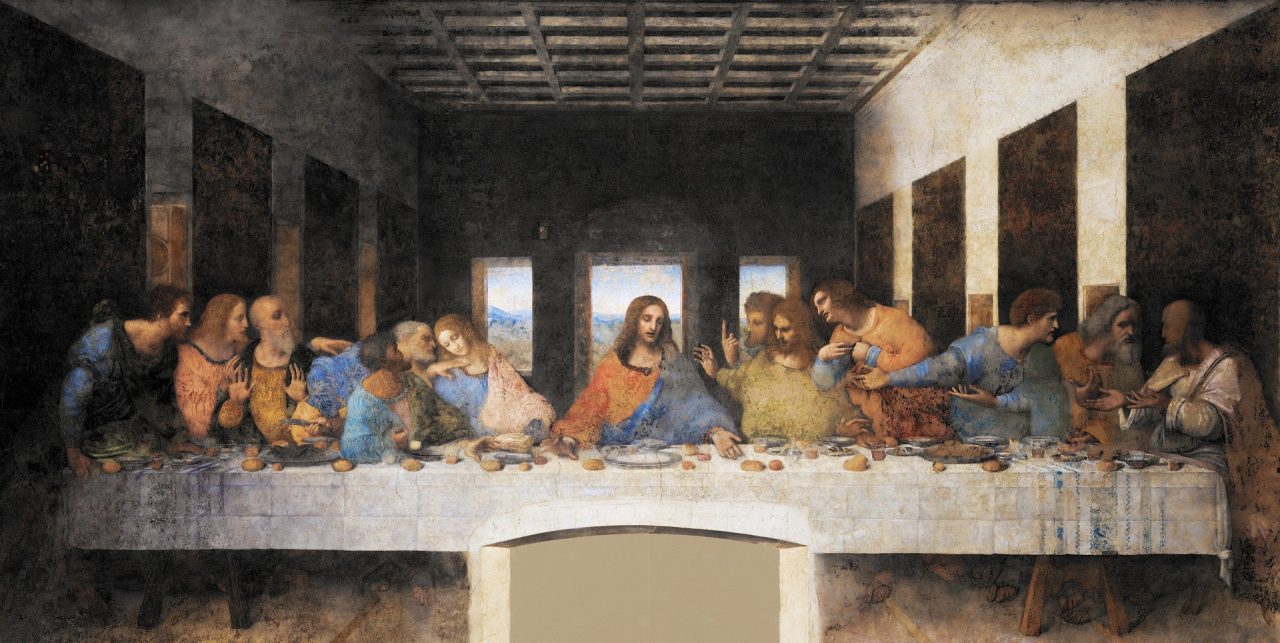 Arguably, the world’s two most famous paintings are da Vinci’s Mona Lisa and The Last Supper. Certainly these images, and those of the Vitruvian Man, are indelibly etched in the collective consciousness of anyone with an interest in art, science or culture.

Though born into an age of great possibilities, da Vinci remained, as Sigmund Freud described him, “Like a man who awoke too early in the darkness, while the others were all still asleep.” His restless mind, forever hopping from one project to another, meant that many of his works are unfinished or fragmentary, but in every discipline he showed an insight and invention unmatched in his contemporaries, or indeed in his successors for hundreds of years.

Living in a time of massive social and cultural change, da Vinci benefitted from an atmosphere which questioned the norms established by the Catholic church. He saw both art and science as a route to knowledge and enlightenment and pursued both with unique vision.

Born out of wedlock in the Vinci region of Florence in 1452, Leonardo was educated in the studio of Florentine painter Andrea del Verrocchio and much of his earlier working life was spent in the service of Ludovico il Moro in Milan. Taking an early interest in metallurgy and music—he made himself a silver lyre in the shape of a horse’s skull—by the 1490s he was compiling notebooks full of artistic, anatomical, architectural and scientific studies. Though hundreds of pages are lost, in what survives of the notebooks we find da Vinci’s flights of fancy, such as ideas for the parachute, the glider, the armoured tank, the multi-barrel gun, the diving suit, the collapsible bridge and a clockwork-powered cart. None of these would have been practical using the technology and materials of the time, but da Vinci’s genius was that he foresaw all these becoming reality.

As a sculptor, painter and inventor, Leonardo worked for the Duke of Milan until 1490, completing only six major projects, including the Mona Lisa and The Last Supper.

The rest of his projects, such as anatomical studies using organs preserved with wax, remained incomplete. From this period comes the drawing of the Vitruvian Man (named after Roman architect Vitruvius), a male figure with precise anatomical measurements which is still a fascinating image today. Leonardo’s visions extended to plans for an ideal city, inspired by the horrors of the Black Plague, using hydraulic power to supply clean water. When he died in 1519 in Amboise, France, at what would have then been the remarkable age of 67, the world lost one of its greatest artistic and scientific minds. With interest in da Vinci being shown worldwide on the 500th anniversary of his death, one of the most unmissable celebrations of his work is the Royal Collection of over 200 drawings on display at The Queen’s Gallery, Buckingham Palace, until 13 October, when the exhibition moves to The Queen’s Gallery, Palace of Holyroodhouse for November.

The drawings by Leonardo in the Royal Collection have been together as a group since the artist’s death in 1519. Acquired during the reign of Charles II, they provide an unparalleled insight into the workings of Leonardo’s mind and reflect the full range of his interests, including painting, sculpture, architecture, anatomy, engineering, cartography, geology and botany.

A highlight of the exhibition is a newly identified sketch of da Vinci himself, which will be on public display for the first time. The drawing is one of only two surviving portraits of Leonardo made during the artist’s lifetime. While undertaking research for The Queen’s Gallery exhibition, Martin Clayton, Head of Prints and Drawings, Royal Collection Trust, identified the sketch as a study of Leonardo made by an assistant shortly before the master’s death in 1519. The only other contemporary image of Leonardo is by his pupil, Francesco Melzi, and was produced at around the same time.

Other highlights of The Queen’s Gallery exhibition include Leonardo’s Studies of Hands for the Adoration of the Magi (c.1481), also on public display for the first time. While this appears to be a blank sheet of paper, examination in ultraviolet light has revealed ‘disappeared’ drawings of great beauty, and visitors will be able to see these ‘recovered’ drawings in a full-size ultraviolet image. Other major works on display are studies for The Last Supper and many of Leonardo’s groundbreaking anatomical studies, such as The Fetus in the Womb (c.1511).

Leonardo da Vinci: A Life in Drawing at The Queen’s Gallery, London, is one of a nationwide series of exhibitions of the artist’s drawings from the Royal Collection throughout 2019. It follows 12 simultaneous exhibitions at museums and galleries across the UK (until 6 May 2019).

Later in the year, a selection of 80 drawings will travel to The Queen’s Gallery, Edinburgh, to form the largest exhibition of Leonardo’s works ever shown in Scotland (22 November 2019–15 March 2020). Collectively, these 14 exhibitions offer the widest-ever UK audience the opportunity to see the work of this extraordinary artist.

Why Wristwatches Will Always Be Timeless